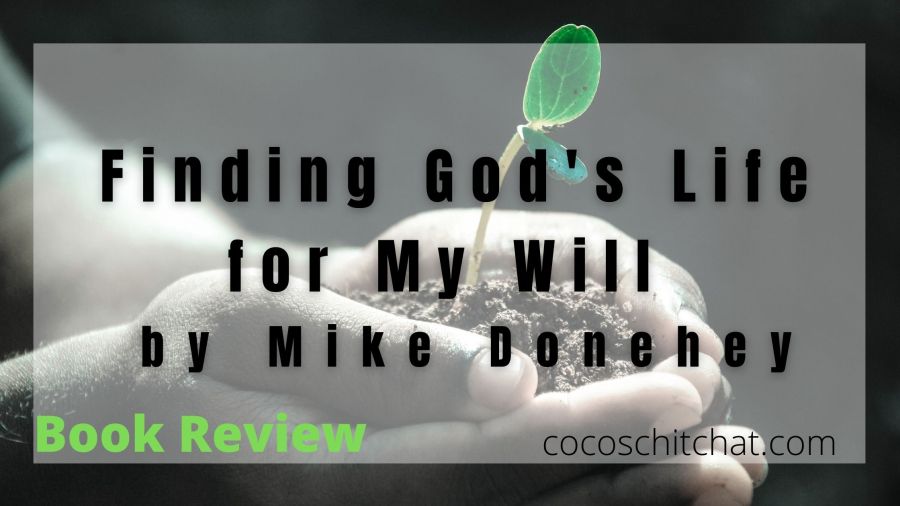 Welcome to CoCo’s Chitchat! For the month of May, my email subscribers have chosen for me to review the book Finding God’s Life For My Will: His Presence is the Plan by Mike Donehey.

“Perhaps God isn’t giving me the plan because He wants to be the plan.”

This was the aha moment for Mike Donehey after years of wrestling with his obsession to know God’s specific plans for his life. He came to the realization that waiting for absolute certainty from God before making decisions may seem uberspiritual, but it can lead to a life of intense stress, paralyzing fear, and crushing regret–just the opposite of the freedom granted to those living a Christ-filled life.

“This is my story…how I gave up begging to know God’s will and began to ask His life to come and change my will.”

With his signature humor and relentless hunger for God, Mike will show you that discovering the Father’s purpose and plan for our lives is not the shell game that we all too often make it out to be. If you’re unsure what to do next, take heart and accept the ultimate invitation: learn to see God as the plan, not simply the formula to the plan.

I first heard about this book from an interview with Mike Donehey I watched on YouTube, and one idea he presented stood out to me: God doesn’t always speak to us in grand ways, but we should still desire to give Him the opportunity to do so. I thought it was so intriguing–this concept of going to God simply to spend time with Him, rather than demanding that He give us some new revelation or fix all of our problems in life. Maybe a successful quiet time isn’t seeing a burning bush that reveals our destiny or hearing the voice of God tell us what college to attend–maybe it’s being in His presence and allowing Him to change our hearts and minds from the inside out.

I decided to pick this book up because of that, and I’m so glad I did! It offers a lot of perspective shifts and wisdom for those wrestling with what God’s plan for them is.

Throughout the book, I found myself agreeing whole-heartedly with what he was saying–I just hadn’t thought of his ideas in that way before. It’s a very eye-opening read, and I would especially recommend it for my age group (teenagers/young adults) because it offers a lot of wisdom for living as God would have us to live. It’s a fresh perspective on what it means to be a servant/follower of Christ.

Since I’m a fan of Mike Donehey’s former band, Tenth Avenue North, I personally enjoyed the book even more as it gives insight to what was going through his head when he wrote the songs. I also found myself laughing at several points because Mike’s just that kind of guy! The stories he tells are personal and vulnerable, which I’ve come to appreciate in a Christian living book. The narrative is easy to read and friendly as well. Overall, it’s super hooking, and I finished it in just a couple of days because I didn’t want to put it down.

Donehey explores topics such as Christian leadership (and why he believes it shouldn’t even be a thing), humility, social media, and making the most out of the seemingly bad situations in life. He does so by sharing mistakes that he’s made, experiences he’s had, and stories of what God has done in his life to show him that, sometimes, we’re just pursuing the wrong things altogether. He also includes Scripture and points to the Bible for examples.

I’m tempted to just tell you everything he says, because the truths he presents are so significant, but I guess that would ruin the point of reading the book. So really, pick this book up for yourself if you’re a) wondering what God wants you to do next, b) wondering if you’re called to ministry but aren’t sure, c) want to grow closer to God, d) enjoy Tenth Avenue North, or e) all of the above! Not only is it fun to read, but it’s filled with wisdom and I know that you will be inspired by it should you choose to pick it up.

It’s not so much in the format of a devotional book, though I suppose you could read it as such, and there aren’t any reflection questions. It is, however, a really great Christian living read that would make a great addition to your shelf.

Have you read this book? Do you want to read it now? Let me know your thoughts in the comments!

In Christ now and always,